melrose. twenty. lives in nagoya, japan. likes simple & beautiful thing. my lj is mostly about my life, arashi, and something else. i'm friendly but sometimes suck at commenting & keeping in touch. i stalk a lot, i mean it, take that into consideration if you decide to add me.

if you want arashi's translations/subs, head over to

i guess that's about it. 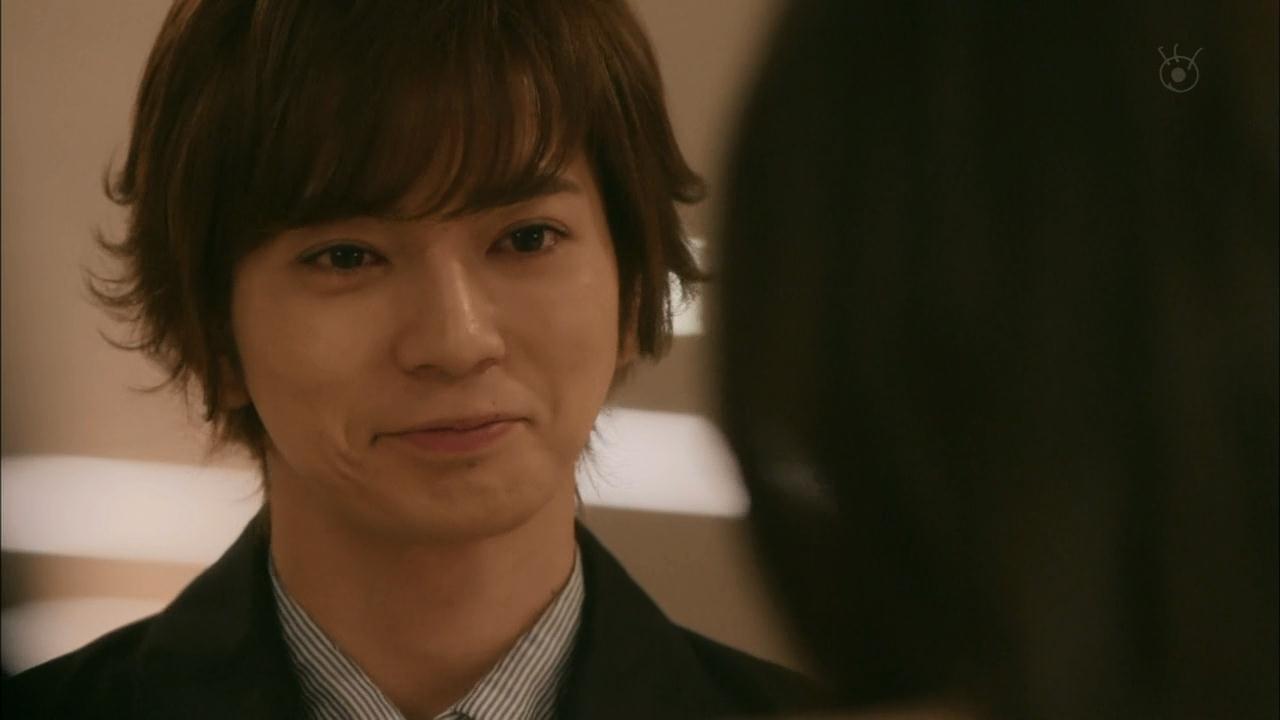 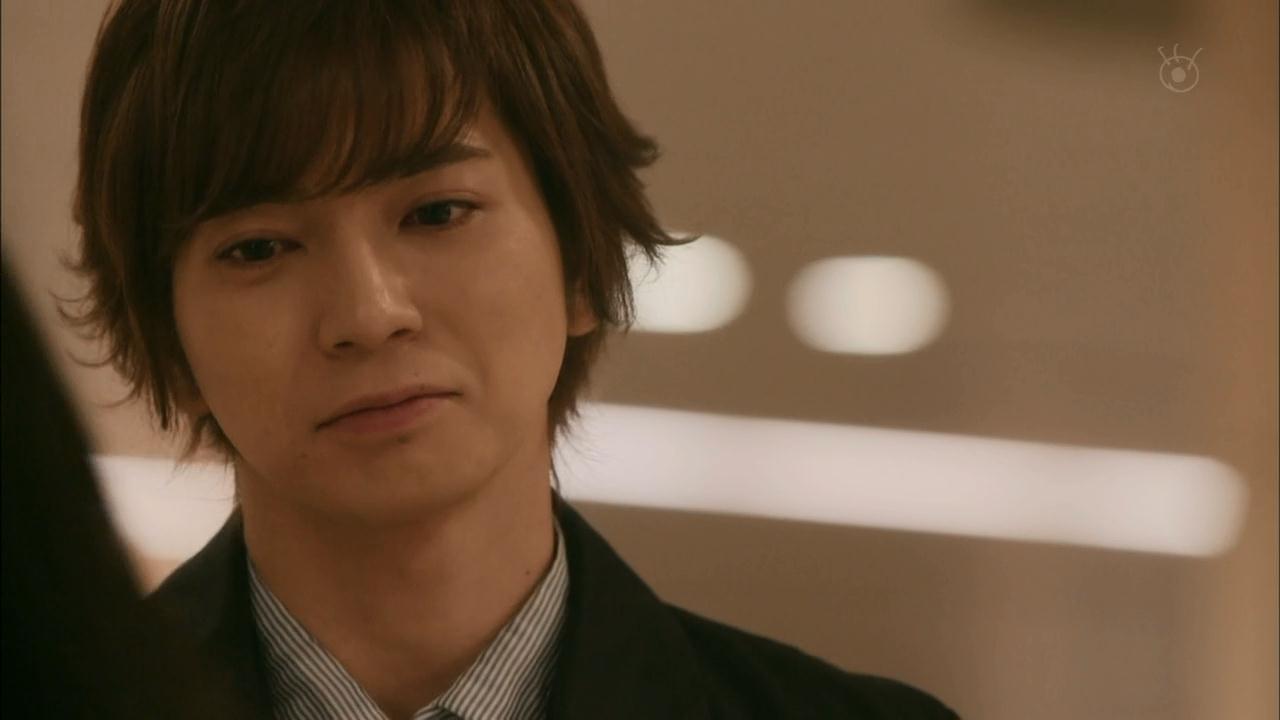 If I am inducing to tears just from this, how will I fare when Hidamari no Kanojo DVD is out.

I don't like this drama that much and I must admit I'm only following it because of Jun (and chocolate) but I don't know why I doesn't dislike Saeko like some fellow tumblr fangirls. I think she is the real-ist character in this drama, portraying girls who are greedy in love and simply cannot choose between two men. There are totally them out there in real life.

Last month of the year!

Recently I have started a habit of going to bed a 3 and waking up at 12 p.m! I know it's bad but when it's past 2, all my sleepiness seems to fly away! I can't resist watching Arashi at night (pervert!). I really want to resume a normal and healthy life soon since I've started to look like an owl and I think I lost some weight because I only eat dinner now I rise at noon.

I partly want this year to roll over quickly because I will turn hatachi next year and...something great might happen (like welcoming the twentieth year of life in Japan--attending a coming-of-age ceremony in a kimono) But there is still so much to do and nothing is decided yet :( My stress level these days is really no-joke. Last week, I was speechless for a whole minute when I found my first grey hair!

The nipple-see-through outfits are great, of course but I mostly was overjoyed because Arashi literally stormed the entire performance. Now they are getting older (forgive me!) and busier, their stamina seems lackluster in live performances. Even the normally stoic serious Jun looks slurring sometimes. It's really refreshing watching they get crazy and wild with the audience during Funky! The only disappointment is the lack of Nino butty in P.A.R.A.D.O.X. I fancy he got shy and had to bribe Jun to avoid showing his arse on national television! (bumbed)

Really looking forward to Kouhaku now Haruka-chan is the co-host! She promises lots more fun than Maki last year. I watched the backstage footage and it looked like she and Leader will be so much fun!

( You are about to view content that may only be appropriate for adults. )

( You are about to view content that may only be appropriate for adults. )

Yes, I did it. I quit so, consequently, I may have thrown away my entire future.

I was really unhappy at my university. I don't want to complain endlessly so I won't. So one fine day, I decided that I had had enough. I packed my rucksack, stormed out of my class and yelled at the woman at the student service office, who silently judged me all the time I went there and thought I didn't notice-oh, how wrong she was-, that "I quit. I won't go to this full of pretentious people college any more."

In reality, I just sent in a letter of deference. The reason was I wanted to study abroad.

...which leads to where I am now. I am preparing to study in Japan next Fall, well, if they accept me.

I have always fancied myself the planing type but it turns out, I just act on my impulse. In two days, I will be sitting the most important examination to decide my success chance and just two hours ago, I discovered that I had booked the wrong center, which is 500 kilometers from where I live. Plus I feel oh soooo not confident about this exam at all.

Deadlines are drawing near...this might be the wrong choice...oh what am I doing...what have I done to myself...

These are my thought patterns for all this month.

When April comes, my life will drift in one of these two paths:

The worst scenario: I enter the college drop-out slash no future-r Hall of Fame.

The best scenario: I will be whistling and packing my things for Tokyo, Japan.


The cliché of the day: MAY THE ODDS BE EVER IN YOUR FAVOR.

It has been a long while since I last wrote a proper entry. It is easy to blame real life but it is not the reason. I still update lj everyday and catch up with all of Arashi's stuff.

I am in this place which people call 'near-the-top'. I am not an English native speaker but I have been learning it for about twelve years and now I am capable of listening to BBC, reading proper online newspaper with 'real' news (not just magazines), speaking in good British accent and communicating through e-mails. I am even tutoring English for a payment now, actually. However, since I passed the university entrance examination, I literally don't have to study English any more because my major is in Japanese and I am really afraid of losing my English ability.

You who can speak (a) language(s) other than your mother tongue all know the hardship when studying a foreign language. When you first start, it is really frustrating. It seems like an impossible feat because there is just too much to learn and you get discouraged really easily. But after you pass the beginner phase (without giving up), the way from Elementary to Intermediate gets smoother. Intermediate to Advanced level is a little bit tougher but joyful all the same. However, but what do you do after reaching that Advanced goal?

I remember watching a study English on television program when I was young. The teacher was a man who had studied abroad and had a Ph.D in English. He said that he used to talk to his teacher that he felt like he kept staying at the same place, that he couldn't move on, couldn't advance. The teacher said that he had reached a place called 'near-the-top'. Learning a language was like climbing a mountain. After the initial obstacle, the inclined slope made you move forward faster. You felt strong, interested and inspired and it was like you could keep climbing forever. As you got nearer and nearer to the top, the slope became more and more upright and you started to feel the gravity held back your step. You couldn't go on for long without struggle and the frustrating feeling from the start went back to haunt you.

I couldn't put myself in his shoes at that time but now I find myself in the exact same situation.

I started translating Arashi's stuff because obviously I love them and I want to improve my Japanese. But more than that, I want to keep my English from getting rusty. One day, I went back to a concrit meme in lj. There was a comment said my English sucked so much that she didn't bother to join the community to download whatever there. At first I was angry, then I got upset, then I felt really discouraged and frustrated at myself. I am a perfectionist but sometimes I get really lazy and just rush through things. I know she is right and I am thankful to her for pointing that out thus waking me up but I am clueless for a way to improve all the same.

Now I want to move up my ladder and become more fluent in English. Unfortunately, my environment at the moment isn't an ideal one. Since college started, I have started to surround myself with Japanese books and Japanese friends. The only connection between me and English is through fandom but, as sad as it sounds, I don't have any Arashi's fan friend.

I am really social awkward and bad at making (much as keeping) connection and really suck at keeping in touch. In real life, I only stuck with my old friends and even in the rare cases where people talk to me first, I am barely a talkative person with strangers simply because I don't know what to say and I am afraid of putting them off for saying unnecessary/silly things. Therefore, most people just conclude that I am aloof or don't like them while actually I don't mean it at all.

I am aware of my lacking and have been trying to fix it for years now but I just don't know how. I am a really private person but like Jun, I like hanging out with friends and am quite a party person if with people I know well. It's not like I don't like to make new friends, it's just that I don't know how to thus, come back to the topic, I don't have any fandom friend. And it makes me sometimes really sad because all my friends in real life are only interested in K-Pop. I have no one to fangirl with.

So it may sound weird, I know it does, and I may appear to be super creepy and desperate for saying such a thing but if you are, well, interested, please talk to me. I am soon-to-be 19, a Jun's fan, like Sho/Jun pairing (actually I like all Arashi pairing now) and people often say that I am nice. If you has taken the time to read until here, you must know now that I am awkward but if you want to fangirl with me, please fangirl with me. I believe I am not a super unreasonably insane and crazy fan so you don't have to worry about that (hehe).

「When the camera wasn't rolling, Sho picked something off Jun's cheek with his hand (rumour said it was Jun's eyelash).」 via twitter
artwork @ weibo

ginger001 has written in her post, something seems a little awkward when Jun mentioned his encounter with Suzuki-san. Since the episode, I have been curious about it and finally, this morning, after a quick visit to weibo, I found the (probably true) answer. Sho: You have met MatsuJun before, haven't you?
( Collapse )

It's nice to see Arashi take on different roles helping each other even in just a small span of 1-2 minutes. It's no doubt Nino and Sho is getting a new talk show and Aiba a more location-based show.

Q: This spring, do you have anything you want to complete as Arashi?
Arashi (exept Ohno: Of course we do! 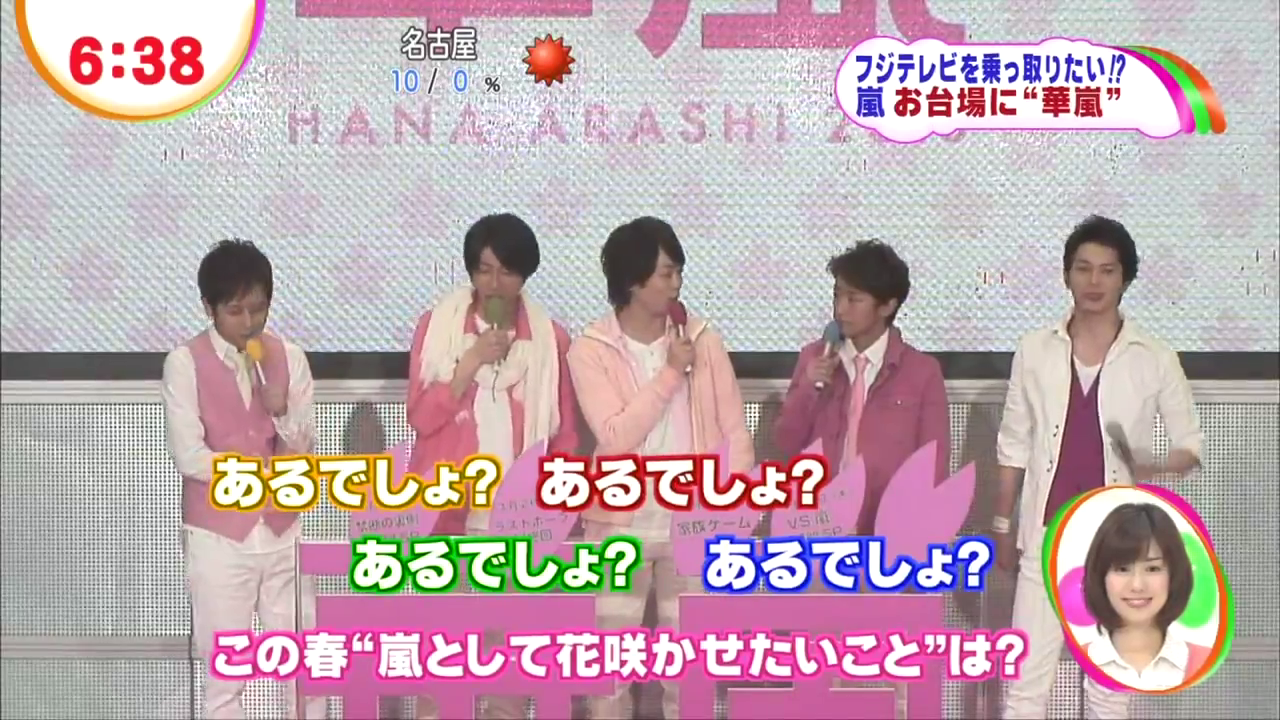 Cue for Ohno to speak